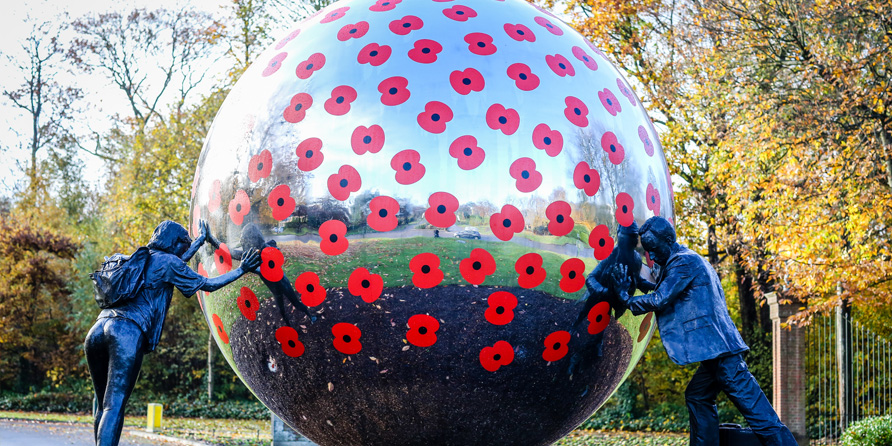 A ‘Field of Remembrance’, made up of more than 1,200 poppies created by pupils from the three Kings Hill schools, is currently on display in The Control Tower in Liberty Square.

Each poppy is coded, allowing the children to keep their own creation in exchange for a £3 donation to RBLI. The charity is currently running a £14m campaign to create a specialist Centenary Village for veterans and their families.

Susan Davies, estate manager for Kings Hill developer Liberty Property Trust, said: “We delivered a blank poppy template to each of the 1,200 pupils which were then returned to us beautifully, individually decorated. The end result is a very moving piece and a fitting tribute to the fallen from the whole of the Kings Hill community.”

As well as the ‘Field of Remembrance’, the ‘silver ball’ sculpture has been covered with poppies, making a striking entrance to the development. A giant six foot poppy, purchased from RBLI, has also been installed on the exterior of the Control Tower, creating a focal point for the Remembrance Sunday ceremony planned by Kings Hill Parish Council for the community. The parade will begin from The Control Tower at 10.30am on Sunday, November 11.

Poppies can also be seen on letting boards across the business park and on welcome boards alongside the A228.

Liberty is also publishing a book charting Kings Hill’s evolution over the last three decades. Available before Christmas from the Gallery at The Control Tower in Liberty Square, the book will be on sale for £10 with all proceeds going to RBLI. More details will be available at www.kings-hill.com.