BACK TO ARTICLES
Kings Hill remembers
Kings Hill’s Liberty Square was filled by hundreds of people for the Remembrance Day service and parade on Sunday. 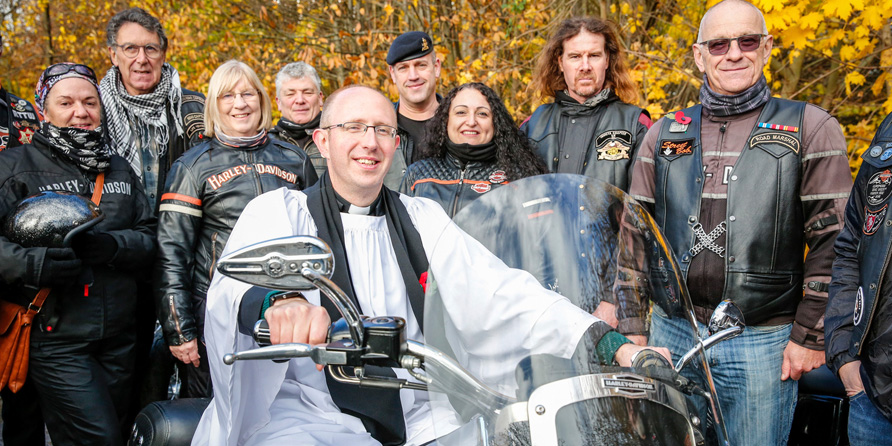 Kings Hill’s Liberty Square was filled by hundreds of people for the Remembrance Day service and parade on Sunday.

The congregation included members of the Invicta Chapter of the Harley Davidson Owners Group, who had their bikes blessed before leaving to join the Ring of Red M25 Ride of Respect, when riders dress in red and travel clockwise around the M25 to create the largest poppy in the world.

Also in attendance were deputy Lord Lieutenant Louise Bryant, Councillor Anne Kemp, members of the parish and borough councils, the armed forces and a choir with singers from the three Kings Hill schools.

The service took place in front of the iconic Control Tower and was conducted by the Rev Mark Montgomery of St Gabriel’s at Kings Hill and Rev Matt Ross, Kings Hill Christian Fellowship. ‘There but not there’ silhouettes, funded by a grant from the Armed Forces Benevolent Fund, were a significant part of the service.

The ‘Field of Remembrance’ in the Control Tower gallery, which was made up of more than 1,200 poppies created by pupils from the three Kings Hill schools, proved very popular with parents and children alike. Each poppy was coded, allowing the children to keep their own creation in exchange for a £3 donation to RBLI.

Afterwards there was a parade from Liberty Square to the ‘Running Airman’ sculpture where wreaths were laid and members of the public placed poppy petals in Perspex boxes in an act of Remembrance.

“It was very poignant to have the service outside the Control Tower that saw so much action in World War II,” said Susan Davies of Kings Hill developer Liberty Property Trust. “The community was out in force and it was wonderful to see so many paying their respects to those who lost their lives in active service.”

Liberty is also publishing a book charting Kings Hill’s evolution over the last three decades. Available before Christmas from the Gallery at The Control Tower in Liberty Square, the book will be on sale for £10 with all proceeds going to Royal British Legion Industries. More details will be available at www.kings-hill.com