BACK TO ARTICLES
New Aviation themed playground
The latest amenity in Kings Hill – an aviation-themed playground reflecting its past heritage as an airfield – is now open and ready for play. 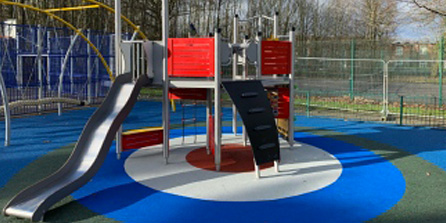 The latest amenity in Kings Hill – an aviation-themed playground reflecting its past heritage as an airfield – is now open and ready for play.

Eleven pieces of brightly coloured steel play equipment have been installed in the large playground which is opposite the community centre.

Suitable for children of all ages, including toddlers, the imaginative equipment includes a landscaped ‘Control Tower’ mound with a tunnel and telecommunications talk tubes, a spinner over a propeller and another over a compass as well as swings over a runway and images of a plane.

There is also a viper swing on which a group of children can play on a long, undulating rope suspended by chains.

The playground was designed by HAGS – which manufactures and installs recreational equipment all over the world – to include RAF themed graphics in reference to Kings Hill’s past as a strategic military airfield.

HAGS employee Steve Hyder was honoured to have his grandfather’s initials added to the rear tail of a Spitfire, which is outlined on the safety surface. Capt John Peaty was based at RAF West Malling during the Second World War and flew Spitfires from the base.

“We wanted to create a site that felt exciting and colourful but with clear links to the aviation heritage of the area,” said Vic Gosden, one of HAGS play space designers. “We combined blue and green surface graphics to create ‘land’ and ‘sky’, with play equipment specified to mimic the excitement of taking off or spinning around in a dogfight.

“We also looked at shapes and layouts of the modern-day Kings Hill as seen from above, incorporating these into the design to merge the past and the present. In particular, the unique layout of the former Control Tower and its surrounding landscaping offered some great opportunities to create something special as part of the play area.”

Susan Davies, estate manager of Kings Hill developer Liberty Property Trust, added: “We are very proud of our heritage and try to include reference to it wherever appropriate. It will be great fun for the children and encourage imaginative play but it also has an educational role, reminding them that the place they are playing in has an interesting and important past.”

The playground has been funded by the Kings Hill Residential Estate Management Company which is financed by the residents of Kings Hill.