BACK TO ARTICLES
Double gold for Kings Hill
For the second year running Kings Hill has received two gold medals in the annual South & South East in Bloom competition. 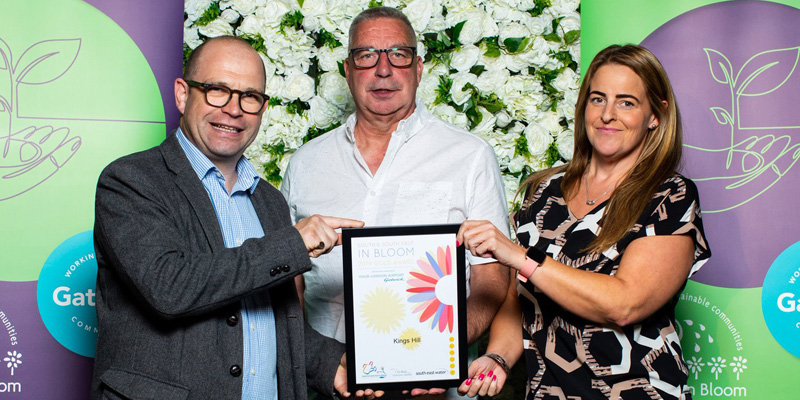 The garden village was awarded a gold and came first in the Business Landscape category and won another gold in the Town Centre category, where it was also named the best in the county.

The judges said public areas are ‘maintained to an excellent standard’ and that ‘from the moment you arrive at Kings Hill you are struck by the well maintained roads, verges and public spaces with impressive pieces of artwork located at key locations set off by careful planting’. Kings Hill, they said, ‘continues to maintain extremely high standards of horticulture and landscaping’.

There was praise for the environmental benefits of initiatives such as deep mulching to reduce watering and herbicide use as well as the way green waste is collected and composted before being used on site.

The judges also highlighted the work being done in Kings Hill to preserve the horticultural heritage of the area by grafting and retaining fruit tree stock from the orchards that once covered part of the site.

The involvement of the community also impressed the judges including the way children are encouraged to get ‘hands-on’ by planting flowers and helping local wildlife by making bird boxes.

Emma Cottee, estate and property management supervisor for Kings Hill developer Liberty Property Trust, is responsible for the landscaping with the help of Coblands, ecologist Sue Deakin and the support of the three schools, numerous clubs and societies and residents.

“It’s fabulous to have been awarded two gold medals for a second year in a row and it’s a credit to the many people who work so hard to make Kings Hill a lovely place to live and work,” she said.

“We scored highly across all the judging criteria including community involvement, horticultural considerations, environment, maintenance and landscaping.

“We look forward to welcoming the judges back next year and showing them the work that has gone into creating the new park that will soon be opening.”

Kings Hill first entered the South & South East in Bloom competition in 2014 when it won a silver gilt award. It received its first gold in 2016, a gold and a sliver gilt in 2017 and a double gold in 2018.